Corruption is the abuse of public power for private benefit. Corruption occurs if a government official has the power to grant or withhold something of value and—contrary to laws and normal procedures—trades this thing of value for a gift or reward. Among corrupt acts, bribery gets the most attention, but corruption can also include nepotism, official theft, fraud, certain patron-client relationships, and extortion.

Examples of corruption would include cases in which a high-level government official accepts cash bribes from firms to reduce competition from imports, middle-level bureaucrats favor suppliers who promise them jobs after they leave government service, a judge rules in favor of an organization because it employs his child, a customs official speeds up the administrative processing of an import shipment in return for receiving part of the shipment, or a junior health inspector accepts free meals to ignore a restaurant’s sanitary violations. Some researchers extend the definition of corruption to include violations of private trust such as insider trading. Although it is sometimes difficult to draw a clear line between where public corruption ends and private violations begin, the usual understanding is that corruption is limited to violations of public trust.

The World Bank further divides corruption into “state capture” and “administrative corruption.” State capture occurs when firms or persons pay officials to revise laws in the favor of the bribe payer, whereas administrative corruption refers to the payment of bribes to distort the execution of existing laws. Another common distinction is that “grand corruption” involves major programs at the highest levels of government, whereas “petty corruption” is associated with less important programs and officials.

At the individual level, corrupt acts are inequitable. They allow some to avoid laws, regulations, and practices that others must follow. Thus, corruption undermines people’s confidence that success results from individual effort rather than from bribery or political connections. In addition, a growing body of research shows that corruption tends to have an adverse impact on a country’s economy.

Besides its adverse impact on democratic processes, widespread corruption tends to reduce economic growth and worsen the distribution of income (the poor must pay bribes but rarely receive them). It tends to increase government spending and reduce tax receipts. Because great opportunities for bribery exist in new construction, excessive unproductive investment in infrastructure often occurs at the sacrifice of necessary maintenance of existing infrastructure. Resources are diverted into the negotiating, paying, and, if necessary, attempting to enforce bribes. Finally, corruption tends to reduce the confidence of people in their own government as well as the willingness of foreigners to invest in, lend to, or trade with firms in the corrupt country.

Even crude analysis points to a significant negative relationship between corruption and the level of economic development. Figure 1 shows the relationship between Transparency International’s Corruption Perceptions Index and income per capita adjusted for differences in the cost of living (purchasing power parity [PPP]) for 150 countries. 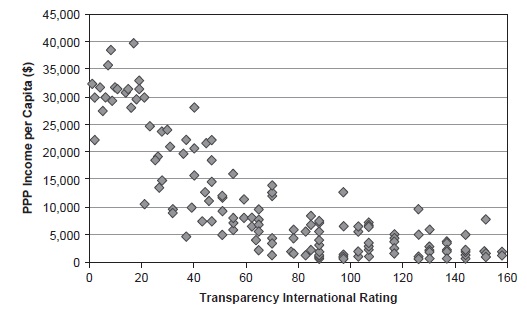 There are no very corrupt rich countries and there are no very honest poor ones. In fact, the correlation between perceived corruption and income per capita is -.8. Of course, correlation is not causation, and it is possible that the causation runs the other way (low incomes provide a fertile environment for corruption).

Corruption is rarely static; in the absence of an effective anti-corruption drive, it tends to worsen over time (the “ratchet effect”). Corrupt officials continuously attempt to increase the inclusiveness and complexity of laws, create monopolies, and otherwise restrict legal, economic, or social activities in order to extract even larger bribes or favors in the future. Perhaps the most damaging aspect of corruption is that it increases the level of uncertainty and forces individuals and organizations to expend extensive effort in attempts to reduce this uncertainty. For example, investors must worry not only about changing market conditions but also whether various unknown officials will seek to block their investment to extract additional bribes.

Estimating the amount of corruption in a society is difficult because this offense often lacks a victim. For example, private citizens may find themselves excluded from business opportunities because of the length of time, expense, or complex procedures required to pursue the opportunity legally. If, to speed up the bureaucratic process, citizens either offer bribes or agree to a public official’s demands, then the citizens often see the officials as doing favors—not imposing burdens. Even if bribe-paying citizens feel victimized, they may hesitate to report corruption for fear of retaliation or legal sanction. Under most legal systems, both the public officials and the private persons who engage in corrupt transactions are legally vulnerable if the corrupt acts are uncovered.

For these reasons, most of the widely accepted studies deal with the perception of corruption as measured in surveys. Probably the best known is Transparency International’s Corruption Perceptions Index (TI/CPI), an annual listing of the perception of international business people and country analysts of the degree of corruption in more than 160 countries. The TI/CPI is a survey-of-surveys and excludes some of the most corrupt countries where few surveys are available (e.g., North Korea). The TI/CPI score ranges from 10.0, most honest, to 0.0. In 2006, Finland, Iceland, and New Zealand were perceived as the least corrupt countries with a TI/CPI score of 9.6, while Haiti had the dubious honor of placing 163rd (last) with a score of 1.8. Other subjective estimates of corruption are the International Country Risk Guide and Control of Corruption measures.

Although important methodological differences exist among these three measures, their results tend to correlate closely.

When corruption is viewed as an economic decision, the willingness of officials to accept or solicit bribes becomes a function of both the size of the bribe and the consequences of being caught. The size of the bribe relates to the scale of the benefit sought by the bribe payer, whether the official must share the bribe with colleagues, and whether other officials might provide competition by offering to provide the same illegal benefit for a smaller bribe. The consequences of being caught accepting a bribe are a function of the likelihood of being discovered, investigated, prosecuted, and convicted as well as the seriousness of the punishment if convicted. In many developing countries, although statutes may call for extremely severe punishment for bribery, the chances of being caught and convicted are effectively zero.

Not only is the eradication of corruption impossible; many attempts to reduce it to tolerable levels have also failed. Anti-corruption policies primarily composed of exhortations to virtue and a spurt of well-publicized investigations tend to have little long-term effect. Often, various political factions will usurp the anti-corruption campaign to settle scores with their opponents.

Successful anti-corruption campaigns, such as Hong Kong’s, take into account the particular country’s cultural, social, political, historical, and economic situation. Successful campaigns include institutional changes to reduce the economic incentives for corruption combined with improved governance, transparency, and an aggressive effort to communicate the purpose and progress of the campaign to the public. Successful anti-corruption campaigns must have widespread support for them to move forward in the face of tenacious covert opposition. Finally, lasting results require a serious effort to change the culture of corruption. A free press that uncompromisingly seeks to expose corruption at every level and improved political competition are critical to changing this culture.

The international community, through its technical advice and financial aid, can either encourage or discourage corruption in developing countries. Foreign aid or loans that are granted without appropriate conditions give corrupt officials other funding streams to divert into their own pockets. Over the past decade, the World Bank and other international and nongovernmental organizations have increased their efforts to ensure that their aid is not stolen and that recipient countries improve their anti-corruption efforts.

Since 1977, U.S. companies that pay bribes abroad have faced legal sanctions in U.S. courts. Although other developed countries are gradually imposing similar restrictions, it is not clear whether such efforts will have a significant impact. Not only does the nature of the restrictions differ dramatically with respect to activities forbidden; as well, analysts suspect that such restrictions simply shift bribe-paying activities from the parent company to subcontractors in the developing country. International efforts can assist but not substitute for a country’s effective anti-corruption campaign.

This example Corruption Essay is published for educational and informational purposes only. If you need a custom essay or research paper on this topic please use our writing services. EssayEmpire.com offers reliable custom essay writing services that can help you to receive high grades and impress your professors with the quality of each essay or research paper you hand in.