The U.S. Department of Homeland Security deports more than 1 million nonresident aliens annually, including about 150,000 to 200,000 “formal removals.” A formal removal occurs when an alien is decreed deportable in an administrative proceeding within the U.S. Citizenship and Immigration Services. Deportability may be due to undocumented entry, visa overstay, or criminal conviction. More than two thirds (69.5 percent) of formal removals in 2005 were Mexican nationals, with nationals of Honduras (7.0 percent) and Guatemala (6.0 percent) a distant second and third. More than one third of formal removals (36.2 percent) resulted from attempts to enter without proper documents (see Table 1). A similar offense, “present without authorization,” resulted in an additional 34.6 percent of removals. Only about one fifth (19.2 percent) of formal removals were due to criminal violations. Thus undocumented migrants account for the majority of formal removals. Nonetheless, nearly 90 percent of deportations are termed voluntary departures. This occurs when foreign nationals are permitted to depart the United States without formal proceedings. By far the greatest number of these deportations occurs when the U.S. Border Patrol returns undocumented Mexican nationals directly to Mexico. 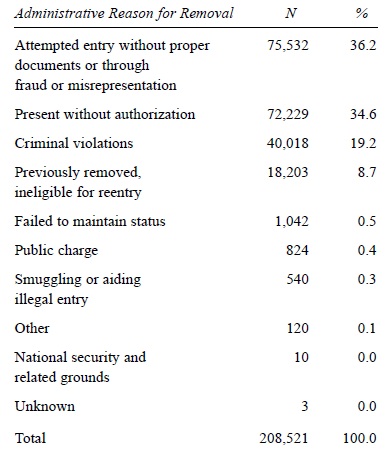 The history of deportations interrelates with conditions that cause xenophobia: periods of financial insecurity, war, and mass immigration. The first legal grounds for deportation came through passage of the Alien and Sedition Acts of 1798. In preparation for a possible war with France, the United States passed An Act Concerning Aliens, granting authority to the president to order the deportation of any alien deemed “dangerous to the peace and safety of the United States.” The president was also granted the power to remove aliens who had been imprisoned. Another related law passed in the same year was An Act Respecting Alien Enemies. This act gave the president the power to detain or deport aliens if their country of citizenship was at war with the United States. Whereas three of the acts passed in this series were repealed or allowed to expire, the Alien Enemies Act is still enforced in a modified form today.

Faced with the growing diversity of immigrants from non-European countries, the United States instituted a series of laws, including the Chinese Exclusion Act of 1882 and the Immigration Acts of 1891, 1903, 1907, and 1917. These laws restricted immigration and barred Chinese and many Asian migrants. These laws expanded the reasons for the apprehension and deportation of undocumented immigrants, enemies of the state, and criminal aliens. There were relatively few formal removals in the early period of the laws (between 2,000 and 5,000 annually), and voluntary departures were not tracked. Following the Immigration Act of 1903, in which the Bureau of Immigration was moved to the Department of Commerce and Labor, the number of formal removals doubled to nearly 10,000 deportations. By 1910 there were 27,000 removals, climbing to a peak of 37,000 in 1914. Deportations dropped dramatically during World War I to fewer than 10,000 annually by the end of the war. Yet, during this period, demands in the United States required the importation of undocumented laborers from Mexico as many U.S. workers had gone to Europe to fight in the war. By 1924, labor demands had decreased and deportations nearly reached pre-war levels.

The Great Depression and Operation Wetback The Great Depression saw a surge in deportations as labor surpluses led to extreme competition for jobs. Although official immigration statistics show about 351,000 deportations of all nationalities between 1929 and 1939, estimates place the number of Mexican laborers deported or repatriated at between 1 and 2 million persons. Deportations again declined following the Depression, as the United States entered into World War II. Farm labor shortages during the war led to implementation of the Bracero Program, the legal importing of as many as 400,000 temporary Mexican guest workers annually. Even more undocumented workers entered the country during the same time period seeking employment. Yet, growing xenophobia in the early 1950s and the post-Korean War recession caused President Eisenhower to launch a campaign of mass deportations of Mexican workers. Under General Joseph Swing, the Immigration and Naturalization Service instituted a series of raids recording more than a million deportations in 1954 of persons of Mexican origin, even including some legal residents and U.S.-born children of immigrants (see Figure 1). 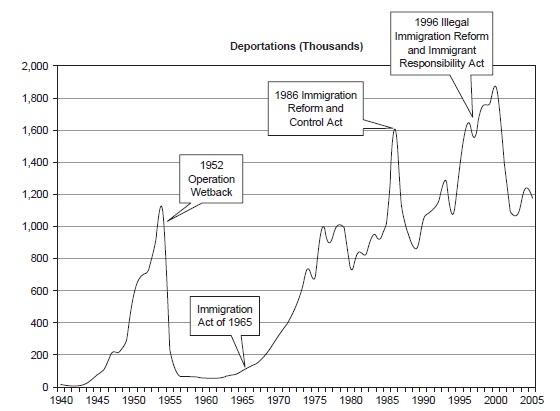 The Hart-Celler Immigration Bill of 1965 (aka the Immigration Act of 1965) radically restructured the U.S. immigration system to one that favored family reunification and immigrants with needed skills. The law also removed preferences for European countries, permitting a greater influx of immigrants from Asia, Latin America, the Middle East, and elsewhere. As the flow of legal immigrants increased after 1965, so too did the number of deportations for illegal entry (officially “entry without inspection”), visa overstay, and other reasons. The number of deportations quadrupled from 82,209 in 1964 to 320,817 in 1970.

In the 1980s negative public opinions of undocumented migrants and the fear of the rapid growth of the foreign-born population compelled Congress to consider changes to immigration laws. The Immigration Reform and Control Act of 1986 sought to control the flow of immigration by penalizing companies that hired undocumented workers while regularizing the status of those already in the United States without permission. It also contained a provision for increasing the Border Patrol to curb further entry without inspection. In that year nearly 1.7 million deportations occurred, partly as a result of the addition of more than 1,000 new Border Patrol agents. The reforms proposed by the Immigration Reform and Control Act of 1986 had the unintended consequences of increasing migration flows through family reunification. Likewise, employers were able to avoid penalties and fines as they did not “knowingly” hire undocumented workers. In 1996 the Illegal Immigration Reform and Immigrant Responsibility Act was passed, adding 5,000 new Border Patrol agents by 2001, appropriating more funding for border control, and introducing a process of expedited removal in which officers of the then Immigration and Naturalization Service (now Department of Homeland Security) could remove undocumented aliens without judicial oversight.

This example Deportation Essay is published for educational and informational purposes only. If you need a custom essay or research paper on this topic please use our writing services. EssayEmpire.com offers reliable custom essay writing services that can help you to receive high grades and impress your professors with the quality of each essay or research paper you hand in.