Economic restructuring refers to any major reconfiguring of the primary way in which goods, services, capital, and jobs get produced, distributed, or consumed. Over the past 70 years, the U.S. economy changed from one dominated by manufacturing and farming to one dominated by industries that provide services rather than producing goods. As early as 1955 the percentage of employees in the service sector passed the 50 percent mark, and that trend has continued ever since. In 2004, service industries accounted for 70 percent of the gross domestic product (GDP) and for 75 percent of all employed persons. The Bureau of Labor Statistics projects that by 2014, that employment figure will increase to 78.5 percent.

What are the service industries? As tracked by the U.S. Census Bureau, they are retail and wholesale trade; transportation and warehousing; information, finance, and insurance; real estate and rental and leasing; professional, scientific, and technical services; administration and support, waste management and remediation services; health care and social assistance; arts, entertainment, and recreation; and other services.

Not all service occupations are alike. The diversity in compensation and skills ranges widely and includes occupations such as nurses, child care workers, software engineers, postsecondary teachers, cashiers, and truck drivers. Certain service occupations require highly skilled, highly educated workers, but a majority of the occupations (measured as the number of people in those occupations) do not require a postsecondary degree, although many do require some technical training beyond a high school degree. The top 10 occupations listed in Table 1 employ nearly 20 percent of the total workforce. 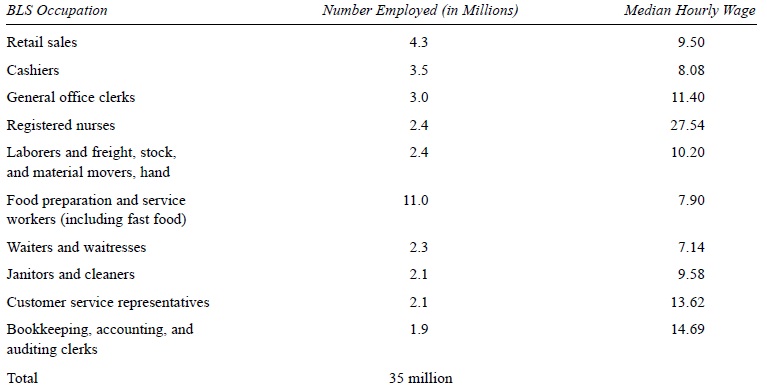 Source: Data from Bureau of Labor Statistics Report “Occupational Employment and Wages, May 2005.”

The trend by which low-skill jobs dominate the U.S. labor market will continue, with projections that two thirds of U.S. job growth will come from occupations requiring only on-the-job training. Those with the most projected growth are some of the lowest-paying occupations (see Table 2).

Why has manufacturing become less of an important economic engine for the United States? In the 1980s many countries, including the United States, changed the international financial rules, making it easier for corporations to move capital and goods from one nation to another. The legal opening of markets also increased competition for U.S.-based companies, as “open” markets are not necessarily equal. U.S. corporations—with the salaries and benefits of their employees and the legal limits on labor, safety, and environmental practices—were at a competitive disadvantage with companies in the developing world. As a result, many U.S. producers utilized cost-cutting practices called offshoring and outsourcing. Outsourcing means buying services from another company—often in another country. Offshoring is when companies opt to move their production facilities to foreign countries—often to what are called economic processing zones. Compared with their U.S. counterparts, workers in economic processing zones receive significantly less pay, have fewer health and safety protections, and have fewer rights to act collectively.

At the same time that manufacturing jobs declined, service industries expanded their workforce and also created new areas of work that included jobs for computer programmers, web designers, and Internet technology specialists. Thus manufacturing experienced a twofold shrinkage in terms of its contribution to GDP and percentage of workers it employs.

Service industries are also less susceptible to off-shoring and outsourcing pressures. The services they provide, the customers they serve, and the goods they move usually exist at the local level. However, although less susceptible to pressures to outsource or offshore, services are not immune to the competitive pressures to cut labor costs by outsourcing. For example, U.S. tax servicing companies, like H&R Block, hire accountants in India to process U.S. income tax returns; customer service call centers can and do relocate anywhere in the world a company can find English speakers. As technology increases the ability to relocate services to secure cheaper sources of labor, corporations will probably outsource whatever they can.

Since the 1970s income inequality in the United States has steadily increased and is now at an all-time high. The Census Bureau reported that 50.5 percent of all income in 2006 went to the top 20 percent of U.S. households; the bottom fifth had a share of just 3.4 percent of all income. Debate continues as to whether or not economic restructuring caused this inequality to grow. Most likely, economic restructuring, combined with the dominant, neoliberal economic assumptions in the 1980s, brought a rise in income inequality. Neoliberalism is the belief that creating open or free markets—which is the absence of, or limit to, regulations on commodity and capital markets—would raise everyone’s living standard.

Like the United States, many Western European countries—including France, Germany, and Sweden— have economies where over 70 percent of the GDP comes from service industries. Unlike the United States, however, they do not have the attendant rise in inequality. Some scholars suggest that each government faced a trade-off among economic equality, full employment, and budgetary restraint. U.S. leaders, as opposed to their Western European counterparts, opted for full employment and some comparative budgetary constraints at the expense of economic equality.

Opening national borders to trade in goods from other countries made goods cheaper, and hence many economists argue Americans are better off overall, despite growing inequality. But there have been major tradeoffs, particularly for low-skilled U.S. workers, their families, and in particular, women-headed households. Historically, manufacturing jobs offered workers some protection through their unions that were able to negotiate job security, living wages, and benefit packages including health care and pensions. All these conditions are less likely in today’s job market. Many of today’s workers face more job insecurity as employers move to a flexible workforce backed by a philosophy of retaining employees only when they are really needed. By using temporary employees through outside agencies, fewer employers offer benefits. In 2006, for example, only 59.7 percent of workers had health insurance coverage through their employers.

These forces affect subgroups in the U.S. population in different ways depending on race, gender, and education level. The most recent census data show that men who did not graduate from high school earned 22 percent less in 2006 than in 1979, while those with a high school degree or with some college saw their wages remain stagnant. Families with a two-parent household have coped by sending an additional worker out into the workforce. In 2006, 63 percent of women with children under the age of 6 were working, compared with 39 percent in 1975. Female-headed households have fared the worst as women across all levels of education earn, on average, less than men. In 2005, 22.4 percent of working families headed by women were earning wages below the poverty line. This compares with 11.7 percent for households headed by single men and 8.3 percent for married-couple families.

A high correlation exists between race and class and inequality. Blacks and Latinos/as, historically shut out of the good paying jobs, have had a harder time in the shift to a service economy. They are over-represented in the poorest paid and least secure occupations. Even when controlling for education, Latinos/as and blacks make approximately 82 percent of whites’ weekly median earnings.

This example Economic Restructuring Essay is published for educational and informational purposes only. If you need a custom essay or research paper on this topic please use our writing services. EssayEmpire.com offers reliable custom essay writing services that can help you to receive high grades and impress your professors with the quality of each essay or research paper you hand in.