One of the most contentious issues facing us today is the impact of changing norms and values on the bedrock of society: the family. The structure of the family has changed significantly over the past 50 years, so much so that it is often difficult for both individuals and social institutions to keep up and adapt. Replacing the traditional breadwinner-homemaker model that at one time epitomized the family are a multitude of family forms—single-parent households, stepfamilies, cohabitating couples, extended and multigenerational families, same-sex partnerships, and grandparents raising grandchildren. In response to these changes, some bemoan the demise and decline of the nuclear family and push for the promotion of marriage as salvation, whereas others see an opportunity for wider acceptance of diversity in family households and advocate for public policy to accommodate families in all shapes and sizes. So, how did we get to this crossroads, in feeling that we have lost touch with the form and function of this cornerstone institution?

What Is the “Family”?

The term family carries with it plentiful social and cultural meanings, and it also has profound and personal significance for most people. Most discussions about the family, however, define it in practical terms as two or more people living together who are related by blood, marriage, or adoption. The most common assumption about households (defined as one or more people who occupy a house, apartment, or other residential unit, except dormitories) is they should consist of two-parent families. However, various social and economic transformations in society have also led to a transformation of the family in recent decades, which has resulted in a decline in the traditional family share of households.

The changes in household composition began gradually in the 1960s, which coincided with radical social changes in U.S. society, including the civil rights movement and the women’s liberation movement, and particularly with the baby boom generation heading into adulthood. The biggest decline in the share of family households was during the 1970s when the baby boomers entered their 20s. By the 1980s, change was still occurring but at a less rapid pace; by the 1990s, household composition reached a still-continuing equilibrium. So with these structural changes and the eventual quieting that occurred, why are we still concerned about the state of the family and where does this alarm stem from? 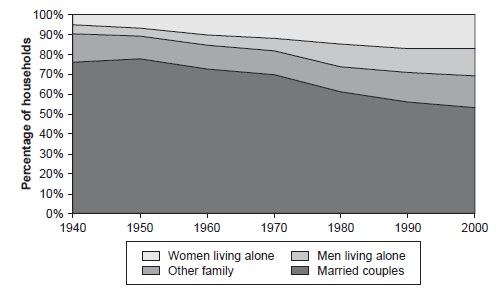 Nostalgia for Families Past

In many public policy discussions surrounding marriage and the family, the common underlying theme is a desire for simpler times. This time warp in mind-set harks back to the 1950s, when a prosperous post-war economy existed and families fared well overall in comparison with an earlier generation that faced the hardships and challenges of the Great Depression. In this era between the 1950s and the late 1960s, changes occurred in family structure from times past, where marriage rates increased and the baby boom occurred. The revision of the breadwinner-homemaker model came about; no longer were women told they did not need to work outside the home in order for the family to make ends meet. What we need to remember about this time, however, is what it represents: a blip in our nation’s history. A precursor to the women’s liberation movement from this time was “the problem that has no name,” which was Betty Friedan’s call to a generation of women about complacency and adherence to conformity. Still, what is often recalled from the 1950s is a romanticized version of the family, not how things really were.

Much discussion continues about the save-the-marriage movement promoted by the Bush administration, in offering financial incentives for marital counseling, the push for covenant marriages and stricter divorce laws in several states, and the continued impetus for the decline in welfare benefits for single-parent households but no change in assistance to working-poor families, as well as the endorsement of the “defense of marriage” laws defining marriage as being between a man and a woman. However, the real problem does not necessarily lie with the structural appearance of the family but with how well families are faring underneath the surface impressions. What are we doing, as a society, to support the infrastructure of the family?

The institution of the family continues to persist and evolve, as families continue to be an important anchor for both individual and collective well-being in our society. Modern norms refuse to dissipate in discussions about the desirability of marriage, the optimal timing of children, and the involvement of fathers in childrearing and of mothers in breadwinning. Families of today are taking on changing and varied forms of adaptation; what we are seeing is how the institution of marriage and family has become more flexible and fluid in reaction to the reality of the choices and opportunities that are available to individuals. Research continues to show an overall transformation in attitudes toward family behaviors; people have become more accepting of divorce, cohabitation, and sex outside of marriage; more tolerant of blurred gender roles; and more open-minded about a variety of living arrangements, family configurations, and lifestyles.

The biggest challenge that families face in society today is economic well-being, as economic fortunes and the health of family relationships remain ever intertwined. Other issues of great importance include how families will balance paid work and childrearing and whether the workplace will become more accommodating to family needs, what income inequality will do to the potential fortunes and life chances of the next generation, and also how relationships between the generations will be altered by the increase in life expectancy, with the impact resting on the sandwich generation to meet the needs of their aging parents as well as their children. Over the generations, the family has changed in response to economic conditions, social change, and such changing demographics as the graying of the population. Therefore, it is not unreasonable to expect families to continue to be adaptive and resilient in the future as well.

This example Family Essay is published for educational and informational purposes only. If you need a custom essay or research paper on this topic please use our writing services. EssayEmpire.com offers reliable custom essay writing services that can help you to receive high grades and impress your professors with the quality of each essay or research paper you hand in.