When a group is so segregated that its members have little chance of contact with outsiders, that group is hypersegregated. In the case of residential location, hypersegregation means that the members of different groups are extremely unlikely to live together. U.S. experts primarily pay attention to the spatial distances between whites and blacks, with increasing attention also paid to the residential patterns of growing Asian and Latino/a populations (some studies have also examined the segregation of Native Americans). Of key concern has been the fact that many whites do not live in neighborhoods with members of other groups, a form of urban segregation documented also in other countries, including Canada, England, France, and Germany.

In an often-cited 1988 study, Douglas Massey and Nancy Denton compiled 20 existing segregation measures and identified five dimensions of residential segregation: evenness, exposure, concentration, centralization, and clustering. Evenness refers to the distribution of groups across neighborhoods according to their proportion of the population. Thus, if 10 percent of the population of a given city is Asian, then 10 percent of each neighborhood should be Asian for there to be no segregation. Exposure refers to the probability that members of a group will have any form of interaction with other groups. Concentration refers to how much space a minority group occupies; if a minority group lives primarily in a few neighborhoods, they are very concentrated. Centralization refers to how close to the center of an urban area a group lives. In many U.S. metropolitan areas, living in the suburbs (as opposed to the central city) is associated with a higher standard of living and better access to high-quality schools and amenities. Clustering refers to the extent to which a group lives in contiguous or adjoining neighborhoods.

Researchers typically use census data to measure segregation, mainly because such measures require geographically detailed population counts (such as in neighborhoods) that are collected in decennial censuses. More specifically, segregation measures usually take into account the distribution of various groups in particular neighborhoods in a metropolitan area relative to their numbers in the total metropolitan population. Neighborhoods are most often defined in terms of “census tracts,” which contain 1,500 to 8,000 people, though sometimes in smaller geographic units, such as blocks or block groups. The statistical indexes developed to measure each of these dimensions typically range from 0 to 1, with 0 indicating complete integration on a particular dimension and 1 indicating complete apartheid or segregation on a particular dimension. Massey and Denton (1989) defined hypersegregated metropolitan areas as those where indexes exceed .60 on at least four of the five dimensions of segregation. 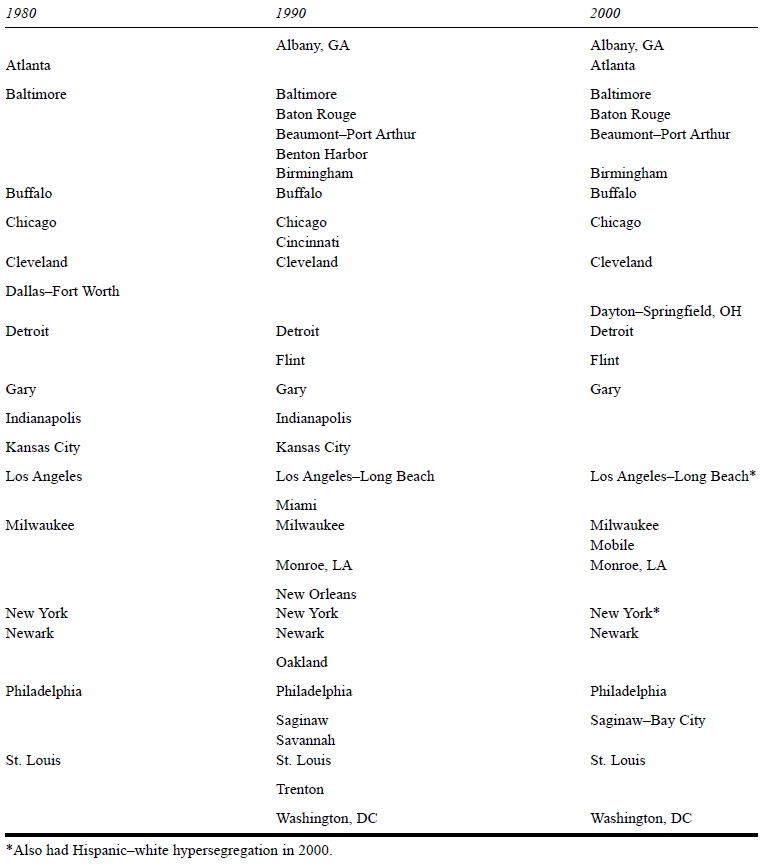 Causes and Effects of Hypersegregation

The hypersegregation of African Americans in so many U.S. metropolitan areas is largely the result of racism and discrimination by whites (though other groups may also engage in similar practices). In addition to their reticence to move into neighborhoods where blacks reside, whites also move out of neighborhoods when they believe too many blacks are moving in. Other practices that have historically served to segregate and thus hypersegregate blacks include discriminatory mortgage lending practices (e.g., some banks will not provide mortgages to black customers with the same income as white customers), neighborhood redlining (mortgages cannot be obtained for certain neighborhoods—usually those deemed “black”), telling potential renters who are black that apartments in white neighborhoods have been taken, and violently attacking and threatening blacks who attempt to move into white neighborhoods. Although racial and ethnic discrimination in the housing market was outlawed with the passage of the Fair Housing Act in 1968, research has documented the persistence, even if at somewhat diminished levels, of discrimination against minorities in the United States.

Larger metropolitan areas, those where blacks make up a large percentage of the population, as well as those in the Midwest, are more likely to be hypersegregated. To date, the known metropolitan characteristics associated with lower levels of black hypersegregation are the proportion of new housing in a metropolitan area and the proportion of the workforce employed by the military. Why might these two metropolitan characteristics reduce hypersegregation? Some older neighborhoods have a predominantly black population. Others are predominantly white and have a reputation of being unwelcoming or hostile to blacks. Newer neighborhoods do not have this type of preexisting reputation and hence attract a more mixed group of potential residents, which leads to lower levels of segregation. The presence of a large military population also lowers segregation because the military often selects housing for its members, and race plays little role in where people are assigned to live.

In 2000, the combined African American population of the metropolitan areas listed in Table 1 was 13.3 million. This amounts to approximately 38.5 percent of the total black population in all of the United States. Thus hypersegregation clearly affects a very large proportion of the African American population in the United States. Hypersegregation increases the isolation of African Americans from other members of society. It concentrates African Americans in neighborhoods that often have a host of issues associated with poverty, including exposure to crime, poorer access to health care, inadequate access to public transit, poor policing, dilapidated and substandard housing, and poor schools with few resources.

This example Hypersegregation Essay is published for educational and informational purposes only. If you need a custom essay or research paper on this topic please use our writing services. EssayEmpire.com offers reliable custom essay writing services that can help you to receive high grades and impress your professors with the quality of each essay or research paper you hand in.