The modern expansion of human numbers began in the late 18th century in Europe and North America. Since then, population growth has spread to all continents and has accelerated: the first billion was reached in 1800; the second, third, fourth, and fifth billions took 125, 35, 14, and 13 years, respectively; and the sixth billion was added in just 12 years, between 1987 and 1999. Today’s world population of 6.5 billion is expected to continue to grow, reaching 9.1 billion later in this century before stabilizing. This projection implies that the world’s population will have grown by more than tenfold—from 0.8 to 9.1 billion—between 1750 and 2050.

Until the mid-18th century, global birth and death rates were both high, at approximately 4 percent per year, and growth rates were close to zero. Over the past two and a half centuries, the death rate declined steadily, to below 1 percent per year by 2000. The birth rate changed little from its historic high levels until the early 1970s, when a precipitous drop began that demographers expect to continue in future decades. The population growth rate of the world peaked at 2.1 percent per year in the late 1960s, when the birth and death rates stood at 3.4 and 1.3 percent per year, respectively. Since the 1960s, the growth rate has declined, reaching an estimated 1.1 percent per year in 2000-2005. In contrast, the annual additions to the population of the world peaked later and will remain high for longer (above 70 million per year until about 2020), because the slowly declining growth rate applies to a rapidly expanding population base. The half-century from 1970 to 2020 represents the period of most rapid expansion of human numbers ever, with the addition of nearly 4 billion people.

The timing of the onset of the transition, the duration of its different phases, and the levels of birth, death, and growth rates differ widely among countries and regions. The developed world, also called the North, was the first to enter the demographic transition in the late 18th century with a decline in mortality, and the birth rate began its decline in the late 19th and early 20th centuries. Today the North has reached the end of the demographic transition, and growth averages near zero. The transition in Africa, Asia, and Latin America, also called the South, started much later than in the North. A sustained reduction in the death rate did not occur until the beginning of the 20th century, and the birth rate remained high until about 1970. Since 1970, fertility in Asia and Latin America declined sharply, while Africa’s birth rate remains relatively high.

Table 1 shows past trends in population from 1950 to 2005 by region. Asia is, and has been by far, the largest region, containing well over half of the world’s population. Population growth between 1950 and 2005 averaged 157 percent for the world as a whole. Over this period, Africa experienced the most rapid growth (304 percent), and Europe the slowest (33 percent). 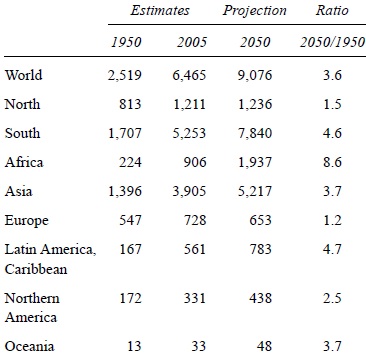 Prospects for the Future

The United Nations biannually publishes projections to 2050 for the world, major regions, and countries. Projected population trends vary widely among world regions (see Table 1). In 2005, Asia had a population of 3.9 billion, which is expected to reach 5.2 billion by 2050. Africa, with 0.91 billion inhabitants in 2005, is likely to experience the most rapid future expansion, more than doubling in size by 2050. Latin America, with 0.56 billion in 2005, is the smallest of the regions of the South; this should remain the case with a growth pattern similar to Asia’s. Projected trends for the two principal regions in the North diverge between 2005 and 2050: an increase from 0.33 to 0.43 billion in Northern America, but a decline from 0.73 to 0.65 billion in Europe. These divergent regional trends imply that nearly all future growth will take place in the South, while the North as a whole will see little change. Another consequence of the wide diversity of growth rates is that the regional distribution of population will shift significantly over time. While Asia’s (60.8 percent) and Latin America’s (8.3 percent) shares change little, Europe’s declines sharply (from 11.3 to 7.2 percent) and Africa’s rises substantially (from 14.0 to 21.3 percent). Between 2005 and 2050, the North’s share should decline from 18.7 to 13.6 percent.

Notably, population growth continues at a rapid pace in Africa despite the large numbers of deaths due to the AIDS epidemic. The impact of this epidemic can be assessed by comparing the standard population projection for Africa (which includes the epidemic’s effects) with a separate hypothetical projection in which AIDS mortality is excluded. The former projects Africa’s population to increase from 0.91 billion in 2005 to 1.94 billion in 2050; the latter expects population size to reach 2.20 billion in 2050. The difference of 0.27 billion between the projections with and without the epidemic is due to deaths from AIDS as well as the absence of births of their descendants. The epidemic clearly has a large effect on population growth by raising the death rate, but expectations are that the birth rate will remain higher than the elevated death rate for the next half-century, thus ensuring continued rapid population growth.

The policy implications of current demographic trends are very different for the South and the North. In the already crowded South, the addition of several billion more people will hamper ongoing efforts to reduce poverty and achieve sustainable development. Concern over these adverse consequences provides the principal rationale for past investments in voluntary family planning and reproductive health programs that help couples avoid unwanted childbearing. Expanding this effort could be social investments in young people—for example, in the education of girls—that help offset population growth momentum, in addition to bringing many direct benefits for the quality of individual lives.

In the North, the potential adverse consequences of very low birth rates, rapid aging, and declining populations prompt extensive discussions but little effective action. Among the numerous policy options proposed to encourage childbearing are free or subsidized child care, reduced taxes for families with children, paid parental leaves, and subsidized housing for young couples. Unfortunately, little useful experience exists to draw on in assessing the potential effectiveness of various options. The reluctance of most governments to pursue explicit pronatalist policies is due to a range of factors, including the awkwardness of domestic pronatalism while subsidizing fertility reduction programs in the developing world; a reluctance to interfere in the personal matter of reproductive choice; the large expense entailed in implementing an effective intervention; and the benefits for the global environment of fewer rich consumers of natural resources. Nevertheless, the urgent need to address these adverse demographic trends is likely to lead to more vigorous action in the near future.

This example Population Growth Essay is published for educational and informational purposes only. If you need a custom essay or research paper on this topic please use our writing services. EssayEmpire.com offers reliable custom essay writing services that can help you to receive high grades and impress your professors with the quality of each essay or research paper you hand in.