Racial segregation of Asian Americans in public schools followed national trends in the late 1800s and early 1900s. Chinese students were barred from public schools in San Francisco in 1859. Their parents responded by opening a private “Chinese school,” which later admitted Korean and Japanese students. The California Supreme Court ruled in Tape v. Hurley (1885) that San Francisco public schools must admit Asian Americans, though the state legislature created a parallel “Oriental School” system the same year. In Hawai‘i, Japanese, Chinese, and other Asian Americans were discouraged from attending schools by plantation owners, and were generally segregated from Whites until Hawai‘i became a state in 1959. Asian American school enrollment matched that of Whites by 1920, and exceeded that of Whites by 1930.

The second period, between 1941 and 1965, began with wartime hostilities, which led to the incarceration of over 100,000 West Coast Japanese Americans in ten detention camps in 1942. Through 1945, tens of thousands of Japanese Americans attended ill-equipped camp schools, though some were allowed to attend a university away from the West Coast. After World War II, Asian Americans benefited from the slow integration of public schools and the expansion of postsecondary institutions. Economic growth also helped propel second and third-generation Asian Americans into professional occupations at rates higher than the national average.

The Immigration and Nationality Act of 1965 initiated the current period of Asian American education. After 1965, immigration increased rapidly from the Philippines, China, Korea, Vietnam, Laos, Cambodia, and India. Many “second-wave” immigrants were well educated and prosperous in their home countries. However, immigrants from Laos, Cambodia, and Vietnam were often war refugees with few educational credentials or financial resources. Unlike the Japanese and Chinese immigrants of the late nineteenth century, many second-wave immigrants brought children, who enrolled in public schools unprepared for linguistic and cultural diversity. Chinese Americans in San Francisco challenged local segregationist practices and limited language and course offerings in the late 1960s. As a result, the U.S. Supreme Court ruled in Lau v. Nichols (1974) that the city’s lack of bilingual programs prevented 1,800 Chinese American students from “meaningful participation” in public schools.

Over time, bilingual and culturally appropriate courses expanded across California and the United States. Also, in the wake of the civil rights movement Asian American Studies programs were established, primarily in the Pacific states, and later in the Midwest and Northeast.

Because the U.S. Census does not disaggregate for nationality, figures on the Asian American and “Asian alone” categories obscure the educational attainment within and among Asian American communities. According to the 2005 ACS, 49 percent who identified as “Asian alone” aged 25 or older had completed a bachelor’s, graduate, or professional degree, compared with 27 percent of the same U.S. population. However, 10.68 percent of those who identified as “Asian alone” had reported less than a ninth-grade education in the 2000 Census, compared with only 7.55 percent of the U.S. population. Female Asian Americans both registered higher postsecondary education completion rates and were more likely to have completed less than nine years of formal schooling. Studies that have disaggregated data by ethnicity have consistently found that school completion and educational attainment rates for Southeast Asian Americans are lower than for other Asian Americans.

These data are far more complex than myths about a model minority, which developed after World War II as a result of educational and economic attainment action for Black and Latino students, reinforcing the “model minority” myth. In Ho, Wong & Chen v. SFUSD (1999), Chinese American plaintiffs successfully sued for the end of a 1983 desegregation consent decree that used race as a criterion for measuring integration. Critics have argued that this action will lead to a racial resegregation of San Francisco schools and hurt poorer students.

Asian Americans trace their ancestry to East, Southeast, and South Asia. According to the 2005 among some—but not all—Asian Americans. Despite its generally positive nature, this myth obscures the educational underachievement of many Asian Americans, and reinforces beliefs about African American and Latino failure. 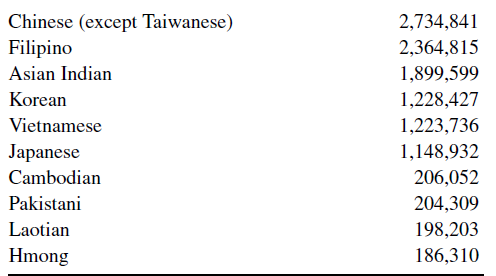 Contrary to the “model minority” myth, research has shown that many Asian American students struggle in school. One study found that overworked parents and limited social capital contributed to working-class Korean American students’ leaving school. Another study found that Chinese American parents’ participation in the mainstream economy helped them to secure the social, cultural, and human capital necessary for their children to attend and achieve in high-performing schools. In contrast, the same study found that low-income Chinese American parents had less opportunity to exploit network connections and lacked the means to relocate for educational opportunities. High educational expectations from parents can be a source of motivation and of conflict for Asian American students. A study of two Chinese American families found that children in both lower and upper income households became estranged from their immigrant parents because of the dissonant cultural expectations about money and appropriate adolescent behavior. High expectations among Korean and Chinese Americans may also be a tactic to avoid racism.

Research on Southeast Asian American students finds much higher levels of poverty than other Asian groups, and some of the lowest per capita incomes in the United States. Though many Southeast Asian American students are successful in school, studies show that significant numbers are isolated from American culture and are more likely to join gangs. Cambodian and Lao students, in particular, are more likely than Vietnamese students to struggle with English, score lower on standardized tests, and leave school.

Another area of research has focused on Asian American career choices. A 2000 study found reticence among Asian Americans, especially recent immigrants, to enter the teaching profession. Another study argued that Asian American overrepresentation in the hard sciences stems from family expectations and attempts to limit awkward social interactions.

Research has suggested that isolation and stereotypes create social pressures for Asian American students, who are sometimes reluctant to seek special services because of the stigma of the “minority” label. Administrators have been shown to neglect focused services, courses, and programs for Asian American students because of the stereotype of overachievement.

This example Asian American Education Essay is published for educational and informational purposes only. If you need a custom essay or research paper on this topic please use our writing services. EssayEmpire.com offers reliable custom essay writing services that can help you to receive high grades and impress your professors with the quality of each essay or research paper you hand in.