Published by the American Psychiatric Association, the Diagnostic and Statistical Manual of Mental Disorders, Fourth Edition (DSM-IV) is the standard reference book used by American psychiatrists and clinical psychologists for classifying and diagnosing mental disorders. The current edition, the DSM-IV, was published in 1994 and revised slightly in 2000 and renamed the DSM-IV-TR— the TR stands for text revision, indicating that the most recent changes involved the addition of current research and clariﬁcation of some portions, rather than any large-scale changes in the classiﬁcation system within. Given the book’s history, this is an important distinction to make. The ﬁrst edition, published in 1952, was only 86 pages long and contained only 60 diagnoses. The DSM-IV, by comparison, is 900 pages long and contains nearly 400 diagnoses (see the following Table for the major categories, along with some of the disorders within each).

This tremendous expansion in the number of disorders has some interesting implications for the apparent prevalence of mental illness in our society. With so many disorder categories, one recent national survey indicates that nearly 30 percent of American adults meet the criteria for at least one psychiatric disorder. Why are there so many more categories now than in the past? Supporters of the DSM-IV’s expansion point out that this simply allows clinicians to diagnose clients more precisely, and thus treat them properly. There is an underlying reason that is less noble but more practical, however: health insurance companies require a DSM diagnostic code on their forms before they will pay for therapy. This puts pressure on the manual’s writers to add more diagnoses so that clinicians can be sure of being paid. This pressure to increase the number of categories has led to some confusion regarding what is a serious mental disorder versus what constitutes an ordinary problem. The latest version of the DSM, for example, includes Mathematics Disorder (not doing well in math) and Caffeine-Induced Sleep Disorder. This last one has the unusual virtue, at least, of being very easy to cure—just have the client switch to decaf. Critics are wary of these changes because they seem to imply that minor everyday problems are as likely to require treatment as serious disorders such as schizophrenia. The continuing evolution of the DSM is necessary to reﬂect changes in the psychiatric and psychological professions and their accumulated knowledge, however, and has removed as many people from the ranks of the diagnosable as the new disorders have added them.

As social norms change, what is classiﬁed as a disorder must change with them. The DSM-III, for example, still listed homosexuality as a disorder. Desiring to have sex too often (nymphomania, a term only applied to women) is no longer considered a disorder, but the DSM-IV does list not wanting it often enough (hypoactive sexual desire disorder). The DSM-IV continues to include a category for emotional problems associated with menstruation, despite having never included any mention of behavioral problems associated with testosterone. This is consistent with psychiatric history, given that one of the founders of the discipline, Sigmund Freud, formulated his theories based largely on observations of female patients suffering from hysteria, which was believed to occur only in women, possibly as a result of being female (note that the root of the word is the Greek term for the uterus, just as in hysterectomy). Clearly, cultural changes and biases have always played a part in psychiatric diagnosis, and they continue to do so today. The DSM continues to be a work in progress, which serves the very important purpose of providing psychiatrists, psychologists, and other therapists a common language to communicate clearly regarding the symptoms and causes of various disorders. 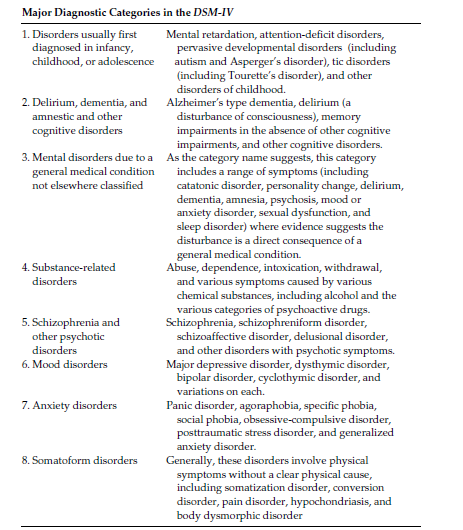 This example DSM-IV tab Essay is published for educational and informational purposes only. If you need a custom essay or research paper on this topic please use our writing services. EssayEmpire.com offers reliable custom essay writing services that can help you to receive high grades and impress your professors with the quality of each essay or research paper you hand in.