Mood disorders are characterized primarily by marked changes in mood that interfere with the person’s ability to function. Mood disorders fall into two categories: unipolar (also known as depressive), which involves depression only; and bipolar, which involves episodes of elevated mood (mania or hypomania) in addition to depression. Bipolar disorder was previously known and is still often popularly referred to as manic depression. Unipolar depression is fairly common, affecting about 20 percent of women and 10 percent of men, while bipolar disorder occurs far less frequently, affecting only 1 to 2 percent of the population and afﬂicting both genders equally.

The gender disparity in depression may be an illusion, however, reﬂecting gender differences in willingness to seek help, rather than an actual gender difference in the incidence of depression. This may be related to the apparently higher rate of alcoholism among men. Women who are depressed are more likely to seek help; depressed men are more likely to start drinking more. The difference also reﬂects the existence of certain forms of atypical depression that cannot affect men, such as postpartum depression.

Most patients experience multiple episodes, and mood disorders are often chronic. Even minimal symptoms are associated with increased risk for subsequent episodes and serious impairment. Suicide is a major concern, as depression accounts for a majority of suicides, and 15 percent of individuals with mood disorders will commit suicide.

Depression is characterized primarily by negative affect (emotional state), along with a loss of interest in activities that were once enjoyed. This is usually accompanied by a loss of energy and productivity, social withdrawal, pessimism, negative feelings about the self, and possibly suicidal ideation. Sleep disturbances are common and may involve either insomnia or excessive sleep. Depression may also be accompanied by disturbances in eating habits, which may involve either loss of appetite or excessive eating, as well as loss of interest in sex. Mania involves opposite changes in the same signs and symptoms. Mood is elevated or even euphoric, happiness replaces sadness, new interests and ventures are recklessly taken on, self-esteem is inﬂated to nearly delusional proportions, need for sleep is reduced, appetites and spending increase, and sexual indiscretions are also common.

The DSM-IV currently recognizes the following types of depressive and bipolar disorders: 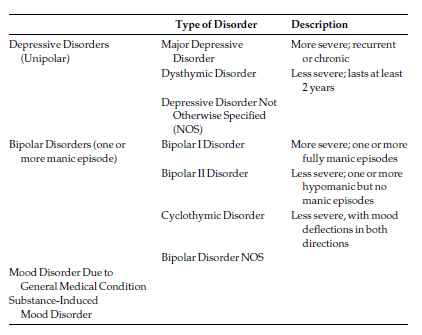 Depression and mania both tend to occur in episodes that are often self-limiting (meaning they clear up on their own, with or without treatment). It is the recurrent nature of these episodes that causes treatment to be necessary. Also, depression can be chronic, though mania tends not to be.

Recent surveys have suggested that as many as 75 percent or more of depressed adults receive no treatment for their disorder. Even among those with bipolar disorders, which tend to be more severe and therefore more likely to be noticed by doctors than unipolar depression, nearly half do not receive appropriate treatment. Given the impact of mood disorders on quality of life, and the hugely elevated risk of suicide compared to the general population, this is tragic, especially in light of the availability of remarkably effective treatments. Antidepressant medications, for example, are very effective in many cases, and the newer generation of medications has largely eliminated the side effects associated with older drugs.

The newest antidepressant drugs provide some clear insights as to the causes of depression. As with other disorders, a variety of explanations of depression and bipolar disorder have been put forth over the years, including psychoanalytic explanations based on the idea of hatred for one’s parents being turned inward, but most evidence is currently converging on a primarily physiological explanation for the syndrome. While it may not actually be the cause of the syndrome in all cases, there is a clear pattern of brain chemistry associated with depression. Variations in the available quantity of two neurotransmitters, serotonin and dopamine, are associated with feelings of well-being. Many psychoactive drugs, including cocaine and other stimulants, induce manic states by increasing the total level of serotonin and dopamine released in the brain, often by blocking the reuptake process which removes the neurotransmitters from the synapses, thus prolonging the feelings associated with the higher levels (see Nervous System). Widely used antidepressants such as ﬂuoxetine (sold under the trade name Prozac) work in exactly the same way. This is why the drugs are known as Selective Serotonin Reuptake Inhibitors (SSRIs).

The same chemical processes are also involved in the cycling between mania and depression that characterizes the bipolar disorders. The manic phase is associated with elevated levels of serotonin and dopamine, but production of excess amounts is something the neurons can only do for a limited time; the consequent drop in neurotransmitter levels which follows involves a drop to below-normal levels, thus returning the person to a depressed state. The same correlation between mood state and neurotransmitter levels may also be the reason for the effectiveness of electroconvulsive therapy (ECT) in cases of severe depression, as the electrical shock may disrupt current patterns and return neurotransmitters to normal levels.

The changes in neurotransmitter levels associated with depression and mania may also be caused by changes in state of mind, however, which is why non-pharmacological therapies, used either alone or in combination with drugs, can be very effective as well. Antidepressant medications are very effective for many patients and are relatively safe, but there is no evidence that they lower the risk of recurrence once their use is terminated. They treat the current episode of depression or mania, but they do not change the patterns in the patient’s life that brought about the depression in the ﬁrst place.

Cognitive-behavior therapy (CBT) is especially promising as a treatment for depression, because it seems not only to be able to relieve distress even in severe depression, but it also seems to greatly reduce the risk of the return of symptoms as long as it is continued or maintained. It also reduces the risk of relapse long after treatment is over. This may be because rather than simply treating the symptoms, CBT involves learning techniques to prevent falling back into a depressed state again. Purely behavioral techniques haven’t been studied as thoroughly as CBT, but they also appear to be quite effective for similar reasons. Meanwhile, there continues to be little or no evidence of the efﬁcacy of psychodynamic ally based therapies.

Bipolar disorder can also be treated effectively with medications. In addition to antidepressants, treatment of bipolar disorder usually includes mood stabilizer drugs, primarily lithium compounds or anticonvulsants, to prevent manic episodes. The use of psychotherapy with bipolar disorder has received much less attention from researchers than it has for depression, but what little research has been done suggests similar promise for a drugs plus therapy approach.

This example Mood Disorders Essay is published for educational and informational purposes only. If you need a custom essay or research paper on this topic please use our writing services. EssayEmpire.com offers reliable custom essay writing services that can help you to receive high grades and impress your professors with the quality of each essay or research paper you hand in.