Much of what is known about hemispheric specialization in the brain (that is, the distribution of various functions between the two sides) comes from the in-depth study, mostly by Roger Sperry and Michael Gazzaniga, of three patients who endured a very drastic and controversial surgical procedure. The split-brain operation, as it has become known, involved the complete severing of the corpus callosum, the thick bundle of nerve ﬁbers that connects the two cerebral hemispheres to each other. The patients all suffered from severe epilepsy in the days before effective medications were available to help them.

In an epileptic seizure, a set of neurons in the brain, the focus of the seizure, begins to ﬁre randomly, and the random activation spreads to surrounding brain areas. If the affected area is fairly small, only a very minor, petit mal seizure occurs. If the activation spreads widely, however, the result can be a grand mal seizure, in which the person can be in real danger. The split-brain patients represented a sort of worst-case scenario among epileptics: their seizures, having spread to involve an entire hemisphere, would then jump across the corpus callosum and involve most of the brain. Due to their failure to respond to lesser treatments, the radical split-brain surgery was regarded as their last hope. By removing all connections between the hemispheres, the surgery prevented a seizure from affecting the entire brain.

Following the surgery, the patients were able to live surprisingly normal lives, with intelligence and personality largely unaffected. Sperry and his colleagues knew that functioning must have been affected, however, and undertook a series of experiments to reveal the subtle ways in which the patients’ functioning had been changed. One of their early successes involved simply conﬁrming Paul Broca’s identiﬁcation, a century earlier, of an area in the left hemisphere as the seat of language production. Sperry and Gazzaniga found that these patients could not identify an unseen object placed in the left hand. Perceptual information was sent from the hand to the right hemisphere, and without a corpus callosum, the right hemisphere couldn’t let the left hemisphere, where the ability to answer verbally resides, know what the object was. More extraordinary results emerged when they experimented with the visual ﬁeld (simply the entire area taken in by your eyes at any given time).

Ordinarily, the left half of the visual ﬁeld is represented in the right occipital lobe, and the right half of the visual ﬁeld sends information to the left occipital lobe. In people with intact connections between the hemispheres, information cannot be presented to only one hemisphere or the other, as it is quickly sent across to the other. If a split-brain patient is presented with a visual stimulus that is only “seen” by one hemisphere while the other “sees” a different stimulus, and the hemispheres are then quizzed separately, however, something very intriguing happens, with implications not just for our knowledge of perception but also for how we conceive of consciousness itself. Consider an experiment in which the subject is told to stare straight ahead at a dot on a screen. Now suppose a compound word (“cowboy,” for example) is ﬂashed on the screen, just long enough to be read, and is positioned in such a way that a vertical line through the dot would divide it between the two words that make it up, as follows: 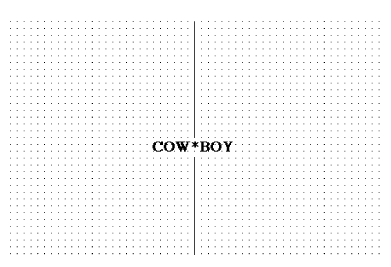 If asked to say what they saw, split-brain patients would say “Boy.” They would then be startled when they saw their own left hands point to “Cow” on a nearby poster. Given the chance to express itself, each hemisphere reports only on what it saw, with no idea of what the other hemisphere saw.

Another experiment involves showing a picture of an object (a spoon, for example) to the left visual ﬁeld, so that only the right hemisphere perceives it. When asked to say what they saw, the patients are unable to do so. When asked to identify the object by feeling an assortment of items behind a screen with the left hand, however, they quickly and efﬁciently select the spoon. When the experimenter says “Right!” the patient may respond with irritation and confusion rather than pleasure, since the speaking part of the brain has no idea what the right answer is. Another phenomenon documented by Sperry and Gazzaniga involves the left hand attempting to stop the right hand from selecting a particular answer to an experimental task. Outside the laboratory, the split-brain patients encountered similar phenomena while doing everyday tasks. The right hand may unbutton a shirt that the left has just buttoned, for example, or one hand may remove from a grocery cart the items that the other hand just placed there (this phenomenon has been dubbed “the alien hand”).

In short, severing the corpus callosum seems to leave patients with two separate conscious minds occupying the same skull, and they are often at odds with each other. Under most ordinary circumstances, the hemispheres can use other mechanisms to determine each other’s state, including input from the various senses (i.e., the right hemisphere can hear what the left hemisphere causes the person to say and infer what that half is thinking accordingly), or the simple expedient of turning the head frequently so both hemispheres are receiving the entire visual ﬁeld. Because of these adaptations, unusual Sperry-led experiments were necessary to reveal the full extent of what was happening. The amount of information about hemispheric specialization that has emerged from the study of this small handful of patients is huge and has profoundly changed how we see consciousness as well as the separation of functions within the brain, to such an extent that Roger Sperry received the 1981 Nobel Prize in Medicine for his work.

The most recent area of psychology to be affected by split-brain research has to do with a possible explanation for the emergence of false memories: They’re the left hemisphere’s fault. Early signs of this were clear in experiments in which the right hemisphere was given an order to do something (get up and walk into the next room, for example), and the person was then asked, “Why did you do that?” The left hemisphere would unhesitatingly make up an explanation (e.g., “I decided I needed to stretch my legs,” or “I’m thirsty, so I was on my way to the kitchen”), despite having absolutely no idea what was actually going on. Gazzaniga dubbed this the interpreter function of the left hemisphere. He has examined this notion further by looking at PET scans of patients as they relate both a false memory and a true one. In both cases, they are asked about the explanation recently given for an action as in the above examples, with the left hemisphere unaware of the true explanation. When the false memory is recalled, areas in both the left and right hemispheres are activated, whereas when the true one is recalled, only the right-hemisphere area is activated. This is a fairly new, and highly speculative, perspective on false memories and their sources, but quite intriguing (see also Brain Imaging Techniques).

This example Split-Brain Surgery Essay is published for educational and informational purposes only. If you need a custom essay or research paper on this topic please use our writing services. EssayEmpire.com offers reliable custom essay writing services that can help you to receive high grades and impress your professors with the quality of each essay or research paper you hand in.