Home
/
Essay Writing
/
How to Write a Philosophy Essay

What Is Philosophy, And Why Do We Study It? 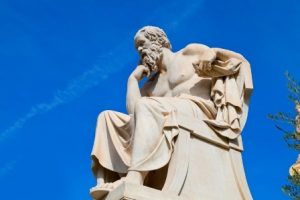 Philosophy is the practice of making and assessing arguments. An argument is a set of statements (called premises) that work together to support another statement (the conclusion).

Making and assessing arguments can help us get closer to understanding the truth. At the very least, the process helps make us aware of our reasons for believing what we believe, and it enables us to use reason when we discuss our beliefs with other people. Your philosophy teacher wants to help you learn to make strong arguments and to assess the arguments other people make.

A philosophy paper may require several kinds of tasks, including:

Let’s examine these elements one at a time.

To reconstruct an argument, you’ll need to present it in a way that someone unfamiliar with the material will understand. Often, this requires you to say a lot more than the philosopher whose work you are writing about did!

There are two main ways to reconstruct an argument: in regular prose or as a formal series of numbered steps. Unless your professor has told you otherwise, you should probably use regular prose. In either case, keep these points in mind:

Let’s walk through an argument reconstruction. Here is a passage by 18th-century British philosopher David Hume:

Take any action allowed to be vicious: Willful murder, for instance. Examine it in all lights, and see if you can find that matter of fact, or real existence, which you call vice. In whichever way you take it, you find only certain passions, motives, volitions and thoughts. There is no other matter of fact in the case. The vice entirely escapes you, as long as you consider the object. You never can find it, till you turn your reflection into your own breast, and find a sentiment of disapprobation, which arises in you, towards this action. Here is a matter of fact, but it is the object of feeling, not of reason. It lies in yourself, not in the object. So that when you pronounce any action or character to be vicious, you mean nothing, but that from the constitution of your nature you have a feeling or sentiment of blame from the contemplation of it. (David Hume, A Treatise of Human Nature).

Step 1: Reread the passage a few times, stopping to look up any unfamiliar words—”disapprobation,” maybe. Be sure you understand the important terms, like “vicious.” (By “vicious,” Hume seems to mean “wicked, depraved, or immoral,” which probably isn’t the way you use the word in everyday speech.)

Step 2: Identify the conclusion. Sometimes your teacher will identify it for you, but even if she didn’t, you can find it. (Caution: It won’t always be the first or the last sentence in the passage; it may not even be explicitly stated.) In this case, Hume’s conclusion is something like this: The viciousness of an action is a feeling of disapprobation in the person who considers it, not a property of the action itself.

Step 3: Identify the premises. Consider the conclusion and ask yourself what the author needs to do to prove it. Hume’s conclusion here seems to have two parts:

Step 4: Identify the evidence. Hume considers an example, murder, and points out that when we consider why we say that murder is vicious, two things happen:

Step 5: Identify unspoken assumptions. Hume assumes that murder is a representative case of “viciousness.” He also assumes that if there were “viciousness” in the “object” (the murder), we would be able to “see” it—it isn’t somehow hidden from us. Depending on how important you think these assumptions are, you may want to make them explicit in your reconstruction.

Step 6: Sketch out a formal reconstruction of the argument as a series of steps.

Step 7: Summarize the argument, explaining the premises and how they work together. Here’s how such a prose reconstruction might go:

To understand what we mean when we call an action “vicious,” by which he means “wrong,” Hume examines the case of murder. He finds that whenever we consider a murder itself, all we see are the “passions, motives, volitions, and thoughts” of the people involved. For example, we might see that the murderer feels the passion of anger and is motivated by a desire to make his victim suffer, and that the victim feels the passion of fear and is thinking about how to escape. But no matter how hard we look, we don’t see “viciousness” or wrongness—we see an action taking place, and people with motives and feelings are involved in that action, but none of these things seem to be what we mean by “viciousness” or wrongness. Hume next turns his inquiry inward, and considers what is happening inside a person who calls a murder “vicious.” The person who thinks or says that murder is wrong always seems to be feeling a certain “sentiment of disapprobation.” That is, the person disapproves of the action and blames the murderer. When we say “murder is wrong,” we usually think that we are saying something about murder itself, that we are describing a property (wrongness) that the action of murder has. But Hume thinks what we are in fact describing is a feeling in us, not a property of murder—the “viciousness” of a vicious action is just an emotion in the person who is thinking about or observing that action, rather than a property of the action itself.

Often, after you reconstruct an argument, you’ll be asked to tell whether it is a good or a bad argument and whether you agree or disagree with it.

Thinking of objections and examining their consequences is a way that philosophers check to see if an argument is a good one. When you consider an objection, you test the argument to see if it can overcome the objection. To object to an argument, you must give reasons why it is flawed.

Here are some questions you can ask to make sure your objections are strong:

Let’s look at our example again. What objections might you make to Hume’s argument about murder?

Often you’ll be asked to consider how a philosopher might reply to objections. After all, not every objection is a good objection; the author might be able to come up with a very convincing reply! Use what you know about the author’s general position to construct a reply that is consistent with other things the author has said, as well as with the author’s original argument.

So how might Hume, or someone defending Hume, reply to the objections above?

Sometimes you will be asked to summarize an author’s argument and apply that position to a new case. Considering how the author would think about a different case helps you understand the author’s reasoning and see how the argument is relevant. Imagine that your instructor has given you this prompt:

“Apply Hume’s views on the nature of vice to the following case: Mr. Smith has an advanced form of cancer. He asks Dr. Jones what she thinks his prognosis is. Dr. Jones is certain Mr. Smith will die within the month, but she tells him he may survive for a year or longer, that his cancer may not be fatal. Dr. Jones wants to give Mr. Smith hope and spare him the painful truth. How should we think about whether what Dr. Jones did is wrong?”

Consider what you know about Hume’s views. Hume has not given a list of actions that are right or wrong, nor has he said how we should judge whether an action is right or wrong. All he has told us is that if an action is wrong, the wrongness is a sentiment in the people considering the action rather than a property of the action itself. So Hume would probably say that what matters is how we feel about Dr. Jones’s action—do we feel disapproval? If we feel disapproval, then we are likely to call the action “wrong.”

This test case probably raises all kinds of questions for you about Hume’s views. You might be thinking, “Who cares whether we call the action wrong—I want to know whether it actually is wrong!” Or you might say to yourself, “Some people will feel disapproval of the doctor’s action, but others will approve, so how should we decide whether the action is wrong or not?” These are exactly the kinds of questions your instructor wants to get you thinking about.

When you go back to read and discuss Hume, you will begin to see how he might answer such questions, and you will have a deeper understanding of his position. In your paper, though, you should probably focus on one or two main points and reserve the rest of your speculation for your conclusion.

Sometimes an assignment will ask you to stake out a position (i.e., to take sides in a philosophical debate) or to make an original argument. These assignments are basically persuasive essays, a kind of writing you are probably familiar with. If you need help, see our handouts on argument and thesis statements, among others.

Remember: Think about your audience, and use arguments that are likely to convince people who aren’t like you. For example, you might think the death penalty is wrong because your parents taught you so. But other people have no special reason to care what your parents think. Try to give reasons that will be interesting and compelling to most people.

If scientists want to test a theory or principle, they design an experiment.

In philosophy, we often test our ideas by conducting thought experiments. We construct imaginary cases that allow us to focus on the issue or principle we are most interested in. Often the cases aren’t especially realistic, just as the conditions in a scientific laboratory are different from those in the outside world.

When you are asked to write about a thought experiment, don’t worry about whether it is something that is ever likely to happen; instead, focus on the principle being tested. Suppose that your bioethics teacher has given you this thought experiment to consider:

An elderly, unconscious patient needs a heart transplant. It is very unlikely that a donor heart will become available before the patient dies. The doctor’s other option is to try a new and risky procedure that involves transplanting the heart of a genetically engineered chimpanzee into the patient. This will require killing the chimp. What should the doctor recommend?

This scenario may be unrealistic, but your instructor has created it to get you to think about what considerations matter morally (not just medically) when making a life-or-death decision. Who should make such decisions—doctors, families, or patients? Is it acceptable to kill another intelligent primate in order to provide a heart for a human? Does it matter that the patient is elderly? Unconscious? So instead of focusing on whether or not the scenario is likely to happen, you should make an argument about these issues. Again, see our handouts on argument and thesis statements for help in crafting your position.

Other things to keep in mind